Brief history of the library of economics and finance.

The library was born in 1941. On that date the Institute of Economics and Finance of the Faculty of Law was established. Initially it also made use of the Ugo Papi Fund but in the late 1960s it was transferred to the Lincei.
Among the valuable works owned by the noteworthy library are:
- Rare collection of Antonio De Viti De Marco distinguished economist and academic (Lecce 1858 Rome 1943).
The writings contained in the fund are based on the most significant schools of thought of that period. In fact, there are also the original works of Maffeo Pantaleoni, donated directly by Panteleoni to his friend De Viti de Marco. The De Viti de Marco fund also possesses economics and monetary policy treaties starting from 1751. Still today some scholars, for their scientific research, make it the object of consultation.
- The Fondo Cosciani (partly lost) was kindly donated by the family. Cesare Cosciani (Trieste 1908 Rome 1985), was an illustrious student of finance science and took care of the fundamental principles of public finance.
Currently the library is updated with publications concerning scientific subjects such as: Economics, Monetary Economics, Political Economy, Economic Policy, Tax Policies, Science of Fianaze and Economic History.
The Economics and Finance library is part of the Interdepartmental Library of Legal Sciences. 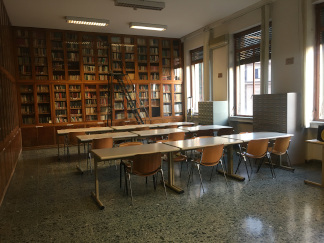