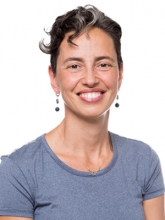 In 2000 I began my research activity at the University of Cagliari (Italy), focusing on the behavioural and in vivo electrophysiological characterization of plastic changes in different laboratory animal models of disease. Since 2005 I joined the group of Paolo Calabresi at the Santa Lucia Foundation in Rome, where I started to study in vitro slices preparations with intracellular and extracellular techniques to explore pathological plastic changes in the corticostriatal pathway and in the hippocampal CA1 in various disease conditions (Parkinson’s disease, Huntington’s disease, ischemic damage, epilepsy, Down syndrome). During my PhD, I have characterized a genetic model of epilepsy, based on a mutant presynaptic protein Bassoon, demonstrating striatal cell-type specific plastic changes that occur, as compensative response, in early-onset epileptic syndrome. These changes correlated with decreased procedural and social learning, morphological alterations of pyramidal neurons and changes in dendritic spines of striatal spiny neurons and altered expression of BDNF trkB receptors in striatal fast-spiking interneurons. There started my interest on the role of inhibitory interneurons in the striatal microcircuitry and the behavioral correlates of different forms of plasticity. At that time I also stated to gain experience in experimental models of Parkinson’s disease (PD), being involved in studies aimed at investigating the mechanisms underlying the different responses to dopamine-replacement therapies and exploring the effects of cell-permeable peptides as new therapeutic strategy. I have coordinated, as a co-principal investigator, a research project funded by the Ministry of Education, University ad Research (Italy) aimed at exploring the role of mTOR signalling in L-Dopa-induced dyskinesia with focus on the role of Rhes protein. That granted me also a research contract at the University of Perugia, where I became adjunct professor in Psychobiology until June 2019. I have coordinated as principal investigator, a project funded by the Ministry of Health (Italy), on the behavioral characterization of acute effects of cortical transcranial magnetic stimulation (TMS) on PD motor symptoms. These results were found interesting by the Marlene and Paolo Fresco Institute for Parkinson’s and Movement Disorders at New York University Langone Medical Center (USA), that awarded me with a grant aimed at extending the study to an early symptomatic model of PD, and to further investigate on the chronic effects of TMS on experimental PD and L-Dopa-induced dyskinesia. I am currently committed in the study of the electrophysiological correlates of abnormal involuntary movements induced by chronic L-Dopa and in response to combined pharmacological and non-pharmacological noninvasive therapeutic approaches. My interests also extend over non-motor symptoms of dopamine replacement therapies and we recently adapted a model of binge eating to L-Dopa-induced dyskinesia model starting to investigate the role of dopamine in behavioural addiction and relevant ventral striatum plasticity. I am currently involved in the analysis of the effects of intensive exercise training on alpha-synuclein aggregation in a new model of PD. 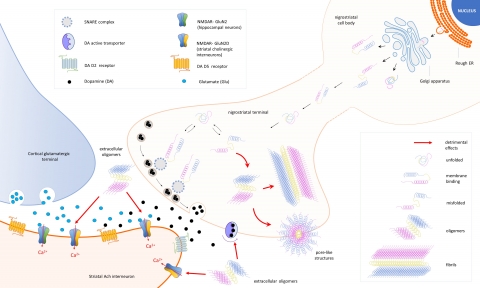