Poetry Off the Shelf - Chicago 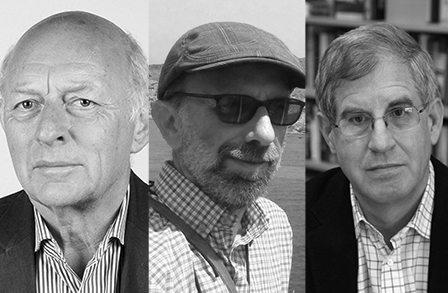 Hailed by many as the greatest Italian poet after Dante, Giacomo Leopardi was born in 1798 and wrote prolifically before his  death from cholera in 1837. Join the translator of hisCanti, and the editors of the monumentalZibaldone for a reading and  discussion of his legacy. A reception follows.

Jonathan Galassi was born in Seattle, Washington, in 1949. He attended Phillips Exeter Academy and Harvard College, and  Cambridge University, where he earned an M.A. in 1973. Mr. Galassi became an editor in the trade division of Houghton  Mifflin Company in 1973. He was a senior editor at Random House from 1981 to 1986, when he joined Farrar, Straus and Giroux as vice-president and executive editor. He was named president of the firm in 2002.
Mr. Galassi has published three books of poems and has translated several volumes of the work of the Italian poet Eugenio  Montale. His translation of the poetry of Giacomo Leopardi was published in 2010. His novel, MUSE, will be published in  June 2015.

Franco D’Intino is Professor of Modern Italian Literature at the University of Rome “La Sapienza,” where he graduated in Italian literature and where he also completed his doctoral research on Leopardi in the context of European Romanticism. He has published books on the tales of Luigi Pirandello and on Italian literary journalism of the 19th century, but his main areas of research are: theory and history of the genre “autobiography” (L’autobiografia moderna. Storia forme problemi, second ed. Rome, Bulzoni, 1998) and the work of Giacomo Leopardi. As well as many articles, he has published the editions of Leopardi’s Scritti e frammenti autobiografici (Rome, Salerno, 1995), Poeti greci e latini (Rome, Salerno, 1999), Volgarizzamenti in prosa 1822-1827(Venice, Marsilio, 2012), and the monograph L’immagine della voce. Leopardi, Platone e il libro morale (Venice, Marsilio, 2009). He is Director of the Leopardi Centre, based in the Italian Department at the University of Birmingham, and Director of the Laboratorio Leopardi, based in the School for Advanced Studies (SSSAS) at “La Sapienza.” He has edited, with Michael Caesar, the complete English translation of the Zibaldone, Leopardi’s notebooks (New York, Farrar Straus & Giroux; London, Penguin Books, 2013).

Michael Caesar is Emeritus Serena Professor of Italian at the University of Birmingham (UK). His teaching and research have ranged from the reception of Dante in The Critical Heritage series (Routledge & Kegan Paul, 1989) to modern and contemporary literature between the 18th century and the present (Umberto Eco: Philosophy, Semiotics and the Work of Fiction, Polity 1999;Modern Italian Literature, with Ann Hallamore Caesar, Polity, 2007). He has published widely on poetic improvisation and performance and its interaction with orality and literacy in 18th-19th century Italy, on literary theory (Gaetano Della Volpe, Eco adn Joyce, the neo-avantgarde, Franco Moretti), and on key modern Italian authors, among them Elsa Morante, Pier Paolo Pasolini, Italo Calvino, and Gianni Celati. His most recent essay on Leopardi, 'Voice, Speaking, Silence in Leopardi's Verse', is forthcoming in The Oxford Handbook of European Romanticism (Oxford University Press).