THE HARVARD PROGRAM IN REFUGEE TRAUMA: PHILOSOPHY AND METHODOLOGY OF INTERVENTION 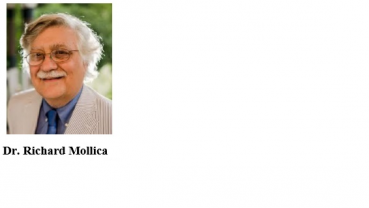 Giovedì, 7 Marzo, 2019
Dr. Richard Mollica Director of the Harvard Program in Refugee Trauma
Richard F. Mollica, is the Director of the Harvard Program in Refugee Trauma (HPRT) of Massachusetts General Hospital and Harvard Medical School. He received his medical degree from the University of New Mexico and completed his Psychiatry residency at Yale Medical School. While at Yale he also trained in epidemiology and received a philosophy degree from the Divinity School. Dr. Mollica has received numerous awards for his work and is the author of “Healing Invisible Wounds: Paths to Hope and Recovery in a Violent World”. In 1993, he received the human rights award from the American Psychiatric Association. In 1996, the American Orthopsychiatry Association presented him with the Max Hymen Award. In 2000 he was awarded a visiting professorship to Waseda University, Tokyo, Japan, for his contributions during the Kobe earthquake. In 2001 he was selected as a Fulbright New Century scholar.  Dr. Mollica has published over 160 scientific articles. He and his team over the past 30 years have cared for over 10,000 survivors of extreme violence worldwide. Through his research, clinical work and trainings he is recognized as a leader in the treatment and rehabilitation of traumatized people and their communities.
The Harvard Program in Refugee Trauma (HPRT) is a multidisciplinary program that has been pioneering the health and mental health care of traumatized refugees and civilians in areas of conflict/post-conflict and natural disasters for over two decades. Its clinical program serves as a global model that has been replicated worldwide. HPRT designed and implemented the first curriculum for the mental health training of primary care practitioners in settings of human conflict, post-conflict, and natural disasters. Its training activities have been successfully conducted in Bosnia-Herzegovina, Cambodia, Croatia, Japan, and the United States. HPRT’s landmark scientific studies have demonstrated the medical and mental health impact of mass violence as well as the cultural effectiveness of its clinical treatment and training programs. Working closely with Ministries of Health throughout the world, HPRT has developed community-based mental health services primarily in existing local primary health care systems. It has also successfully established linkages to major foreign university settings. HPRT’s bicultural partnerships with international collaborators have resulted in culturally effective and sustainable programs that rely primarily on local human resources and indigenous healing systems. In order to achieve its mission, memorandums of agreements have been signed between HPRT and universities in Bosnia-Herzegovina, Italy, Japan and Thailand.